After our Valentine's Day dinner we decided to walk around downtown SLO for a little while before going to get frozen yogurt.  Beverly's Fabrics was still open so we went in and Graham bought me some fabric for a Valentine's Day gift.  The fabric colors were very fittingly valentiney. 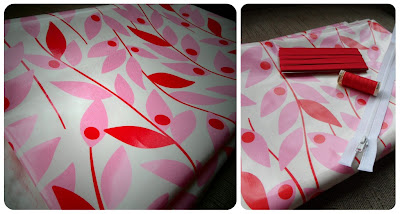 I have plans for this fabric which I hope to complete tomorrow.  So we shall see how that goes.  Hopefully I can post tomorrow night about my latest sewing adventure.

And in other news, we were just settling down on the couch a few minutes ago, after doing our Just Dance 2 workout on the Wii.  Then we heard some loud thumping noises on the side of the house, coming from outside, followed by some squawking.  It sounded like a bird had been attacked by something and was crying.  So we went outside to investigate and see if we could help the bird.  We were shining a flashlight in the bushes and then we smelled a scent that is all too common here - SKUNK!  I didn't last long outside, but the house quickly filled with skunk smell too.  We never could find the source of the noise and it soon stopped, the poor thing.  Shortly after that we saw the skunk waddle down the driveway.  We don't know what happened out there, and unfortunately it still smells like skunk in the house, but I'm getting used to it through our past skunk experiences.
Posted by Julie O. at 10:56 PM