Last Sunday, we decided to make it a lazy morning and make waffles and play video games*.  We made our waffles in our Krups waffle-maker (the waffles turn out not nearly as pretty as my mom's vintage waffle-maker) using the Bisquick Heart Smart mix. We just followed the instructions for waffles on the side of the box.  They turn out to be really tasty waffles though.  We got some strawberries from the local berry stand down the street that brings them fresh from Santa Maria everyday.  These strawberries were huge!  They were like the size of apples!

Look at the strawberry in the palm of my hand!  See, I ended the last three sentences with exclamation points in order to convey their truly monstrous size.  I chopped some up, mixed them with a little sugar and put them, as well as a little whipped cream on my waffles.  Graham is supposed to eat berries sparingly due to his kidney stones :(  So he opted for maple syrup, whipped cream and cinnamon. 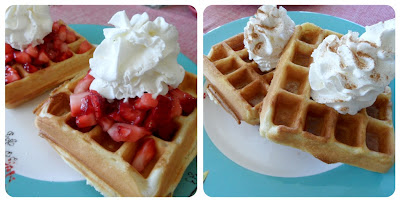 They were super tasty and I think we should make waffles a Sunday morning ritual.

*Lego Star Wars III, I've decided the Lego games are fun for girls too because they are cute little legos, even though I've never seen Star Wars(!).  I did tell Graham that maybe I would, now that I've played the games.
Posted by Julie O. at 11:43 AM