In the Kitchen: Happy Easter!

We had a very simple Easter this year.  Graham's parents were out of town, so we had just my parents over for dinner.  We made some delicious food that I thought I would share.  I worked on the soup and dessert and Graham made the main course.  We had filet mignon with a shallot cream sauce and pan-fried squash.  I made a potato soup (recipe to follow in a separate post) and a butterscotch bread pudding for dessert. 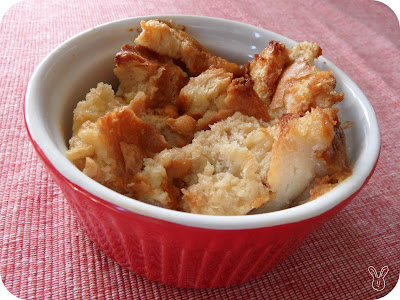 That bread pudding was absolutely delicious.  I had never tried bread pudding before I met Graham, I thought it sounded gross.  It is mushy bread, but it is oh so tasty and now I am hooked.  I used this recipe I found on allrecipes.com.

I had to change the recipe a little when we made it because we didn't have enough brown sugar, so I ended up using about 3/4 cup brown sugar and about 1/2 cup Sugar in the Raw.  We also soaked our bread (we used french bread, that we staled in the oven for a bit) in the milk for about a half of an hour before we baked it all.  Graham was really disgusted by the mention in the recipe about wiggling like a well endowed thigh, but I did poke it and it definitely wiggled!
Posted by Julie O. at 6:08 PM

Email ThisBlogThis!Share to TwitterShare to FacebookShare to Pinterest
Labels: In the Kitchen